Music and the Creator Economy permalink

The Creator Economy is the business or economic model centered around Creators that allows them to monetize themselves or their projects to their communities. It is specially hard for Musicians and the people that work with them to capture the true value of the music they create because of a few characteristics intrinsic to the Music Industry.

To understand why that happens, I'll introduce a few Economic concepts. In neoclassical economics, the free market (self-regulated, efficient) can have market failures - situations where the market is not efficient. The most important one in this case is the non-competitive market failure.

The Music Industry has big barriers to entry - imagine in the past, for a musician to Launch his own album, he would have to buy equipment that were so costly (huge fixed costs) that they couldn't do it by themselves. Only a few individuals or business could afford to do that. Labels that could afford those costs, dominated the market and formed Oligopolies, they have so much market power that they could control the prices of the market and make artists sign terrible contracts for them. 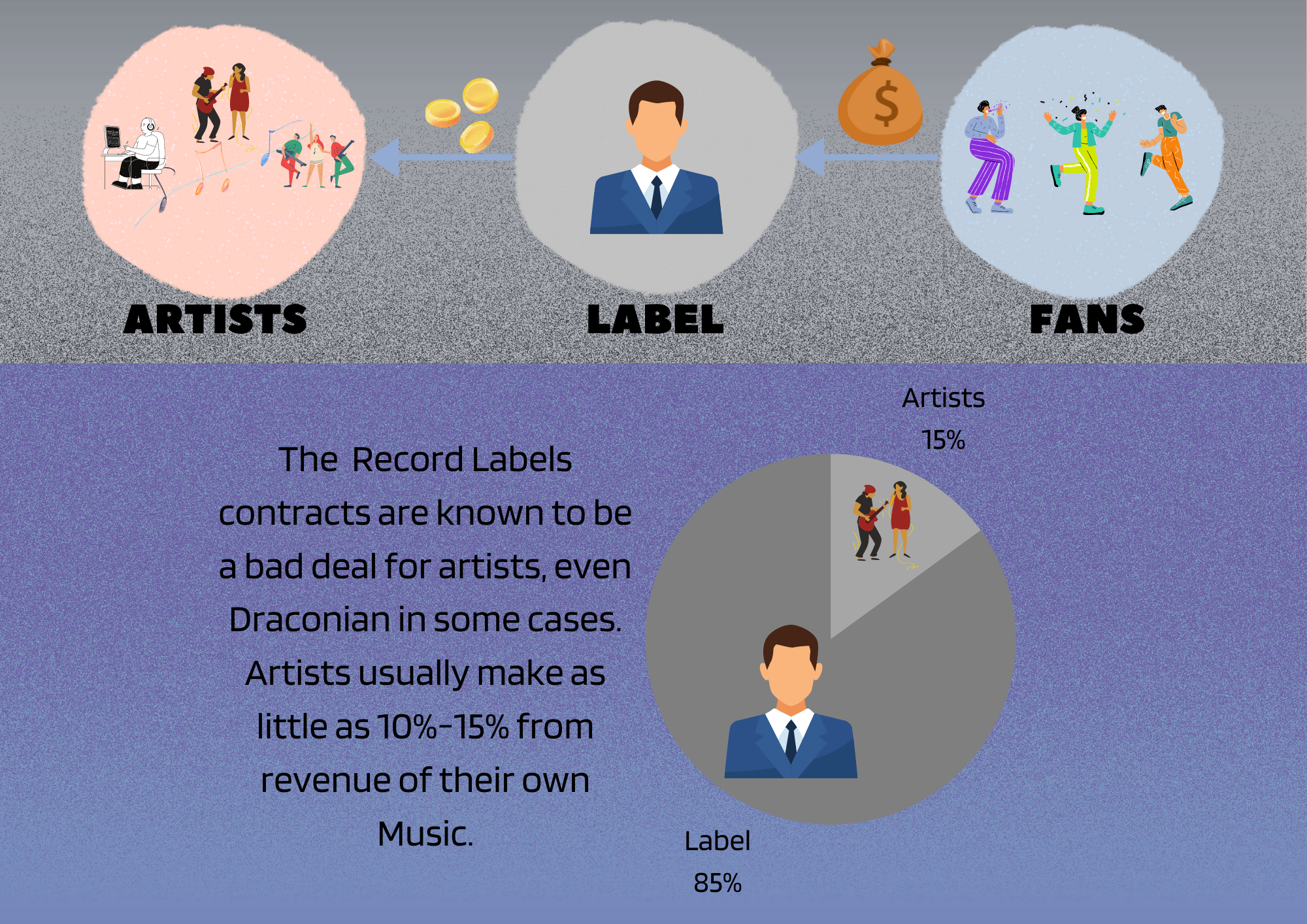 Web2 removed a fair amount of this barrier to entry, Musicians could create their own music and share them to their fan base, without the need of costly equipment and a whole infrastructure in place just to launch a song. A lot of new styles and artists were born because of this revolution, but monetization is still a problem. Labels, streaming apps still take a huge chunk of artists' value just for having that costly distribution infrastructure in place.

Blockchain, because of its decentralized nature, with one of its main feature - removing the middleman - can take this revolution started by web2 to a new level. It allows Artists to really be the owners of their own music (NFTs) and properly monetize themselves, building their own economy around their music and fans (Creator Tokens), without the need of a middleman.

μ-zomia took the lead to create a platform where Musicians and everyone who work with them - composers, lyricists, musicians, performers, singers, track makers, sound engineers, performers, etc. - to be sustainably funded and to create their own economy, empowering their community by using the Dev Protocol ecosystem and solution. 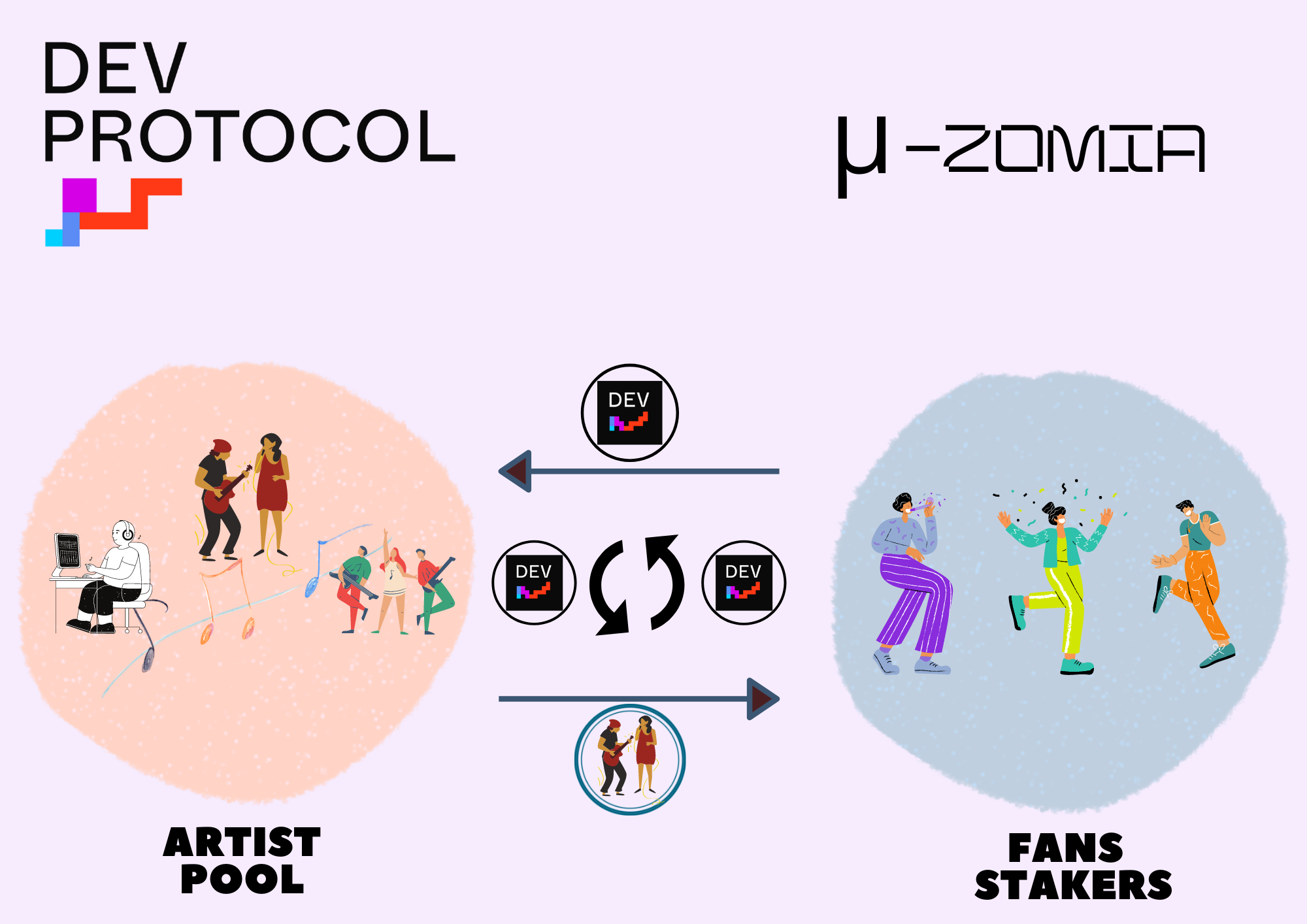 Fans can stake DEV tokens into their favorite Artist pool and fund them. Both the Artist and the Fans receive DEV token rewards, it's a Win-Win situation for both of them. Artists also mint their own token and could distribute these tokens to their fans. These tokens can be designed to have many utilities, which could range from access to premium gated content to voting for the style of the artist's next album, for example.

One of the main motives for Creating μ-zomia was to find a solution for the impact that Covid-19 and lockdowns had on music artists. The effects were devastating. With all public gatherings, concerts and festivals stopping out of nowhere, most artists were left without any sort of income or any prospects of future jobs. 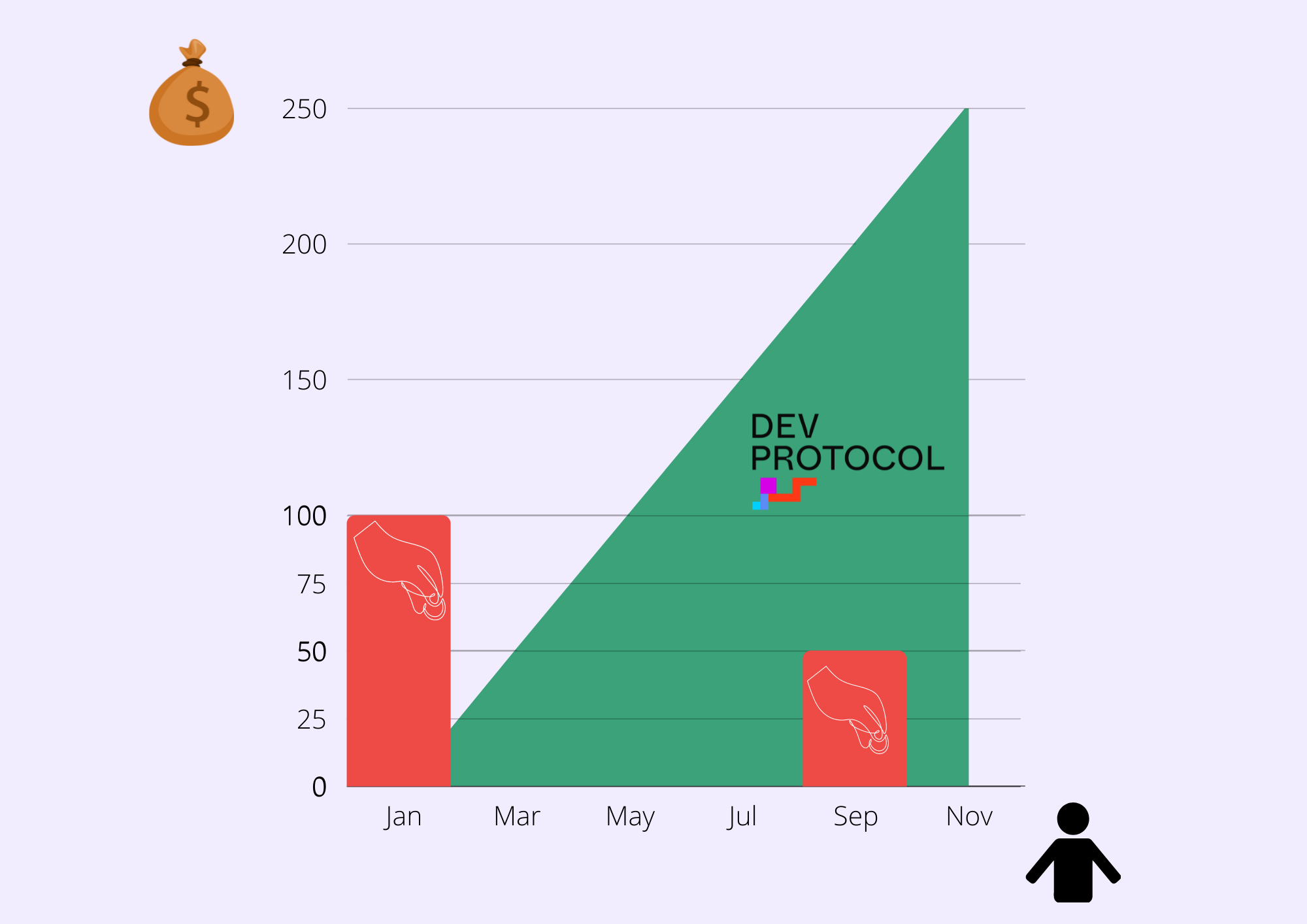 Using Dev Protocol allows fans to mitigate that problem. Imagine the situation of a single fan funding his favorite artists, with Staking - supposing, for simplicity, a constant 30% APY- , sustainable funding (green area) is possible, it doesn't depend on any events happening, or a donation from this fan. He'd only need to comprehend the intertemporal choice he has to make to allocate how much he wants to spend (donate) on his favorite artist over the years and stake that amount, with DEV tokens.

Traditional ways to fund artists (red bars) are usually not consistent over the time. From a single fan perspective, funding depends on Music, Albums being released, shows happening, or just the fan being able to donate. These events usually don't happen all the time and any exogenous shock (like Covid) could be terrible for the artist.

Dev Protocol's and μ-zomia solution has the potential to completely change the music industry. Giving the power to the artist to fully monetize their work and the community to actively participate and benefit from the growth of their favorite artist.